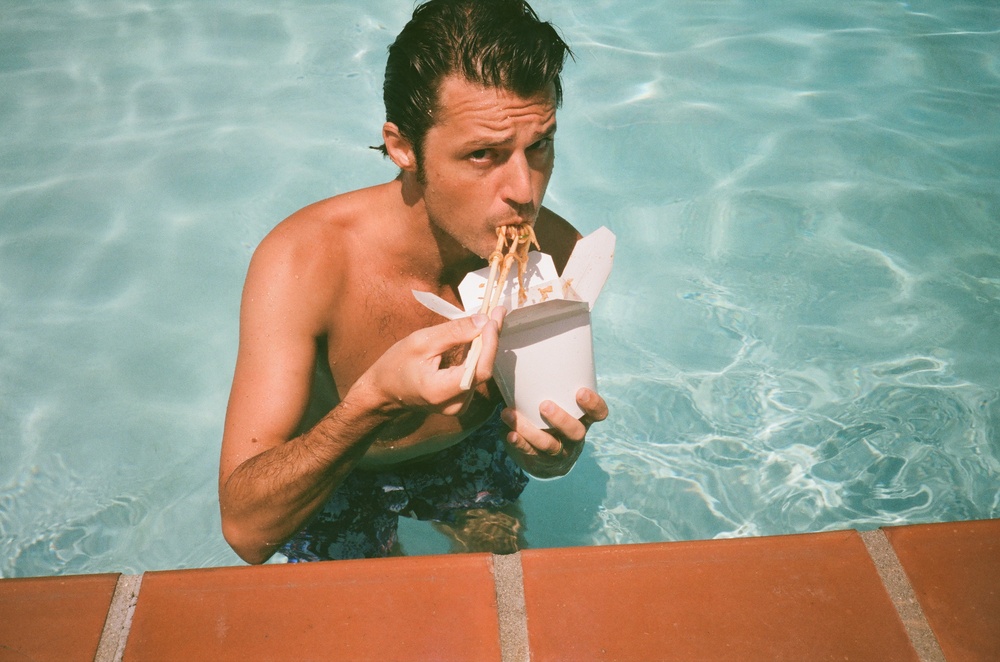 Los Angeles musician Taylor Locke took social distancing to the extreme at a recent headlining appearance at Burbank’s Starlight Bowl. The 5,000-capacity amphitheater, which Locke broke into, was utterly bereft of attendees. But Locke, undeterred, took the stage in clown makeup, hamming it up for crickets, singing his heart out in his own brand of ironic melancholy.

The Starlight performance was a selfie mockumentary-style music video shoot for “Dying Up Here,” the lead single from ​The Bitter End, ​the singer’s forthcoming EP on Harbour Records. The song is a jaunty, tongue-in-cheek ode to entertainers who know the feeling of being run through the wood chipper of dreams that is showbiz. A look at titles like “The Dream Is Over” and the EP’s title track, and you can see a theme developing.

“Having run the gamut of different levels of showbiz experience, you realize what those ​Spinal Tap​-y commonalities are,” Locke, an industry vet at 36, explains of his gallows humor approach.

The sardonic-yet-poppy tunes draw inspiration from the cutting piss-take lyrical witticisms of Nick Lowe, The Kinks, Elvis Costello, Father John Misty and Fountains of Wayne bassist and songwriter Adam Schlesinger. The latter, a fellow band-dude-turned-behind-the-scenes-music-smith, who died from Coronavirus complications in April 2020, had become a mentor to Locke in the last year of his life. “He was a big reason for why this body of work happened,” Locke says of Schlesinger, recalling how his friend encouraged him to appear at a 2019 L.A. writers’ showcase he was hosting.

Suffice to say, there’s a good chance you’re not familiar with Taylor Locke the singer- songwriter. There’s a better chance you ​are f​ amiliar with the big, diverse body of work he’s amassed in his two decades toiling in the trenches of the music industry.

Perhaps you know Locke from seeing him on MTV or arena stages during his 12-year tenure as lead guitarist and co-founder of world-beating 2000s power-pop band Rooney. Perhaps you’ve heard some of his production and session work on your favorite records by artists The New Pornographers, former Smith Westerns front man Cullen Omori, Linda Thompson or late, great baroque-pop cult hero Emitt Rhodes. It’s possible you’ve heard his songwriting collaborations with artists like Geographer and Diplo, or his compositions for shows on YouTube’s Brat TV kids network.

Maybe you caught Locke on stage rocking riffs and leads with Sparks in 2017, when he toured internationally with the art-glam legends, later taking inspiration from the band’s own brand of rock ’n’ roll humor. Or, if you’re hip to the Los Angeles comedy scene, maybe you caught him cosplaying as Lindsey Buckingham with Daniel Day Lewis-level precision in ​Don’t Stop! The Musical Misadventures of Fleetwood Mac,​ the comedy cabaret he co-wrote and co-created. In recent years, the deliciously satirical show’s enjoyed a residency at the historic Hollywood haunt Largo, making fans of Jon

Brion and Judd Apatow, and nabbing guest performers such as Ray Romano and Matt Walsh.

“I set out to bring as little of myself to the act as possible,” Locke says of ​Don’t Stop! ​“but I go off book every night. It’s sort of like Don Rickles as Lindsey Buckingham.”

But if you know Locke, you know that statement’s not entirely accurate — he’s always been a bit of a cut-up; a witty quipster with white-lightning one-liners and a deep appreciation for killer standup and savage sketch comedy. This part of his personality only recently found its way into his songwriting.

“I suppressed that side of myself for a long time to assume the role of ‘serious musician” Locke explains. “It was time to reconcile my musical identity with my love of comedy. I’m funnier in the Largo show than I was in my songs. That bothered me, and I set out to do something about it. My Mr. Show worshipping inner-child needed to merge with the rock n roll singer.”

The Bitter End ​EP and another set to follow, are culled from a robust backlog of scraps and song sketches he’d never had time to finish. But like many of the world’s music pros, the Coronavirus pandemic cleared his dance card of stage and studio gigs.

“I realized it was going to be a while before I was going to be able to produce any bands,” says Locke, who made an impression live-looping cover songs, TV show themes and debuting new originals during regular quarantine livestreams. “I noticed this sarcastic Vegas crooner alter-ego emerging. That character opened up a creative valve for me.”

Another pivotal moment for Locke, in letting his sense of humor become his muse, came when Adam Schlesinger asked him to play that showcase a year earlier. “When he asked me to play that showcase, I had no band, and barely enough songs for a set. He said ‘Just say yes and then figure it out’. Finding the attitude with the humor — Adam was a part of all of that.”